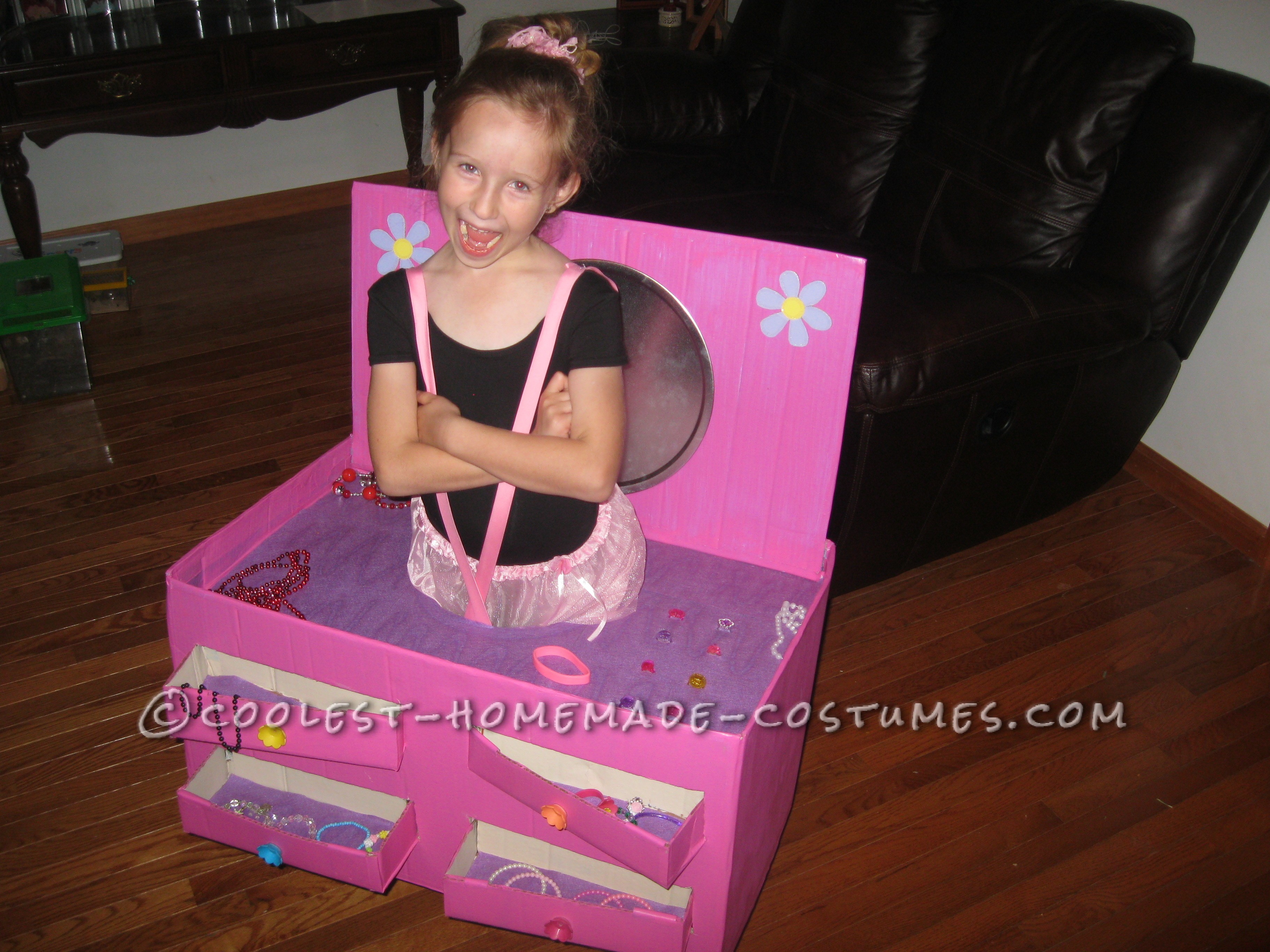 1. HOW THE BEAUTIFUL BALLERINA IN A JEWELRY BOX WAS MADE

I started out with recycled furniture boxes. Measurements were taken for the height, width and thickness according to what I thought would be a good size for my daughter. Next I cut out the base of jewelry box in one long piece and scored the box where it needed to be folded. After folding box together in a square, I used L shaped pieces of cardboard to brace the inside of costume and connect the edges, taping them with gorilla tape. After the base of the costume was made, I measured and cut out one solid piece of cardboard and inserted inside the box frame several inches below the edge to look like a shelf and secured in place with gorilla tape and several L shaped pieces of cardboard on the undersideof the shelf. Again one solid piece of cardboard was cut for the top of the jewelry box and taped with gorilla tape to look like it was opened. I also glued a pizza pan in the center of the top with liquid nails to look like a mirror. To make the drawers, I cut out a template to use for the front and side together, then cut out one for the back. After cutting out all pieces, I used gorilla tape to hold them together. Four holes were cut out where the drawers were to be placed and the cardboard drawers were inserted a short way inside the space. After making the drawers, I cut a slit all along the back side of drawer, on the bottom of drawer  from one side to the other.A strip of cardboard was cut to the same width of drawers but extending to lenght of 2 drawers on one side. The cardboard needs to be placed on backside of drawer. starting from bottom drawer and working all the way through both drawers and tape with gorilla tape. I measured my daughter and cut a circle in the center of the costume. Now to paint the box with her favorite color, pink. Placed purple felt in the bottom of drawers and on shelf. To finish the costume off, I placed jewelry inside the drawers and on top of the shelf. Pink ribbon was taped on both sides of the circle, to the underside of shelves inside of the jewelry box with gorilla tape to hold .

2. THE REACTIONS THAT SHE RECEIVED FROM FROM EVERYONE

My daughter recieved many, many compliments from young children to adults that were either walking with their chid or passing out candy. Several people passing out candy told her that they were giving her extra because her costume was the best they had seen. We had to stop numerous times because someone asked to look at it.

3. THE INSPIRATION FOR MAKING THE BEAUTIFUL BALLERINA IN A JEWELRY BOX

This costume was inspiring to make because with each step that was completed, my daughter was just filled with joy. As you can see on her face, she was so excited to wear the costume when finished. Making the drawers and deciding how to attach them so that they would stay on, was a little challenging but I finally figured it out. I always make my children’s costumes every year and gear it toward something that is significant in my childs life during that year. My daughter LOVES dancing around in her ballerina outfit and also LOVES jewelry, so I thought that would be a wonderful theme.