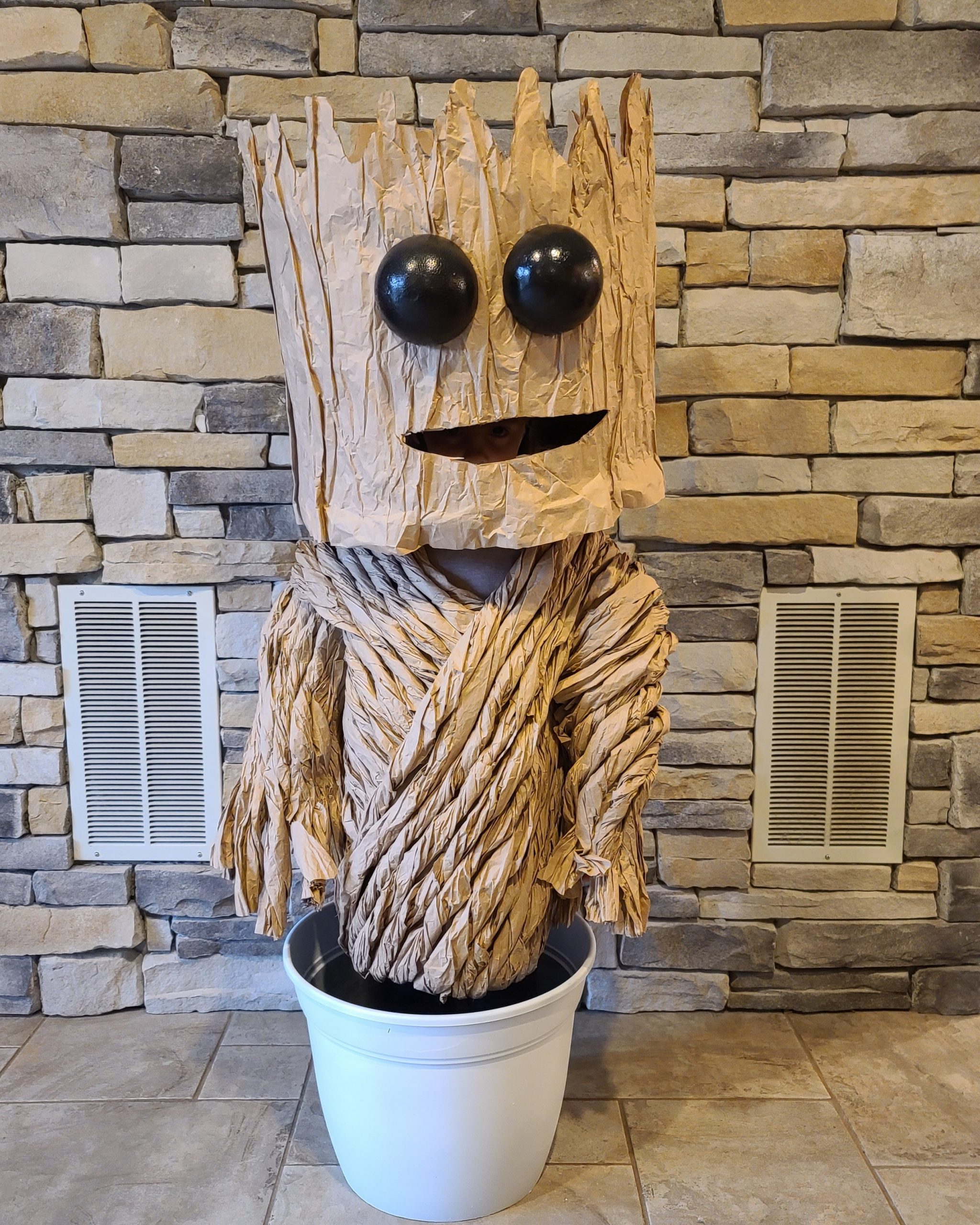 I created this homemade Baby Groot costume from my 5 year old daughter who wanted to be Baby Groot from Guardians of the Galaxy.

Everyone loved her costume. Every time she saw someone, she would stop and do the baby groot dance! And instead of saying trick or treat, she would say “I AM GROOT”! Everyone got a kick out of it and thought she was so cute!

The whole Baby Groot costume is made out of Brown Painters Paper, cardboard, string, duct tape, velcro straps, foam ball for the eyes and a lot of hot glue! Cost to make the costume was pretty minimal.

For the body we used the brown painters paper to make a tube, we used three layers of paper and glued them together with Scotch Photo Mount Adhesive. Inside to keep structure while building, we used 3 rings made of cardboard and used string to attach them together (see picture). We made the straps with folded duct tape. I made the arms out of rolled brown painters paper and taped them where the arms would go. I cut the arms halfway where the elbows would be so that she would be able to bend her arms and move them and used tape to connect them loosely at the elbow. Then we tightly rolled strips of brown painters paper to look like vines and hot glued them all over. I left the arm vines long so that it would hide my daughter’s hand and kind of look like fingers. Then we cut open the backside so that my daughter could put it on easily. I was able to cut out the cardboard rings inside it as the whole thing now had sturdy structure to it. We glued three velcro straps down it so that we could close the back up.

For the head, we did the same thing as the body but bigger rings and sized to fit a little bigger than the body width wise and we used folded duct tape straps instead of the string. It seemed to work better. The middle ring hole was cut so that it would fit on top of my daughter’s head to hold it in place. We also made straps out of velcro to go around her chin to hold it on better so that she could move and dance in it. We put a layer of wrinkled paper over the tube. We cut a foam ball in half and painted it black and glued it on for the eyes. for the eyes. We cut the top of the head and made points going around the whole thing. I cut the top inside circle out to get rid of some of the weight of the head and covered the hole with paper. I also cut the mouth hole out at my daughters eye level so she could see out.

I bought a plastic pot and cut the bottom out and spray painted it white. Then I made straps out of folded duct tape and duct taped and hot glued them to the bottom of the pot on the inside so that my daughter wouldn’t have to hold the pot.

The Baby Groot costume turned out great and my daughter was able to easily see, walk and dance in it. Everyone has loved it so far!

Epic DIY Groot Costume From Guardians of the Galaxy