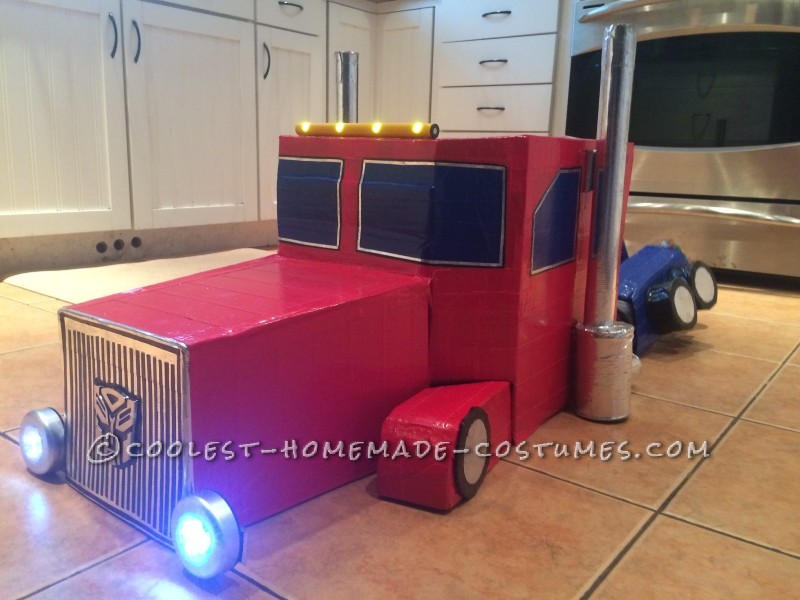 My son is absolutely obsessed with Transformers and he wanted more than anything to be Optimus Prime (the leader of the autobots). he also wanted his costume to be able to transform. I told him that i didn’t think they made costumes like that. He insisted that I make him one. Not wanting to disappoint I told him I would try.

To make his costume I started with cardboard boxes and packing tape trying to figure out the physics of how the costume would work. once I had the physics down I used packing tape, cardboard and paint. It fell apart in about 20 minutes of wear. Then realizing it need to be a bit more sturdy i decided on colored duct tape. The final design is cardboard wrapped in duct tape of various colors. I used soup cans and gift wrap tubes for the exhaust, and toilet paper rolls for the fuel tanks. the emblem on the grill was a gift from my father in law when he saw what i up to. the chest emblem is all duct tape cut to look the same. i used tap lights for the head lights and a light tube that is meant for a closet wrapped in amber colored automotive tape for the cab lights. And finally i bought him an Optimus prime costume for the mask and to fill in the areas of his body you can still see rather than him just wearing jeans or sweatpants.

The reactions he receives are nothing but joy and amazement. Most people ask where i bought it. And the best part is people asking to see him transform. He loves to transform making little robot noises.

This costume took my son and I around 45-50 hrs over the course of a month to complete. He loves it and that’s what my inspiration was. I would do anything for my son and it’s really heartwarming that i was able to bond with him making his costume. He’s my motivator and he’s the idea man. He wanted to enter a costume contest when we finished, but our town is too small. I couldn’t find any contest to enter him in. Not wanting to disappoint him I told him we could most likely find an online contest. Luckily we found this contest and his dream can live a bit longer. Thank you for considering our submission. My son Calum thanks you as well 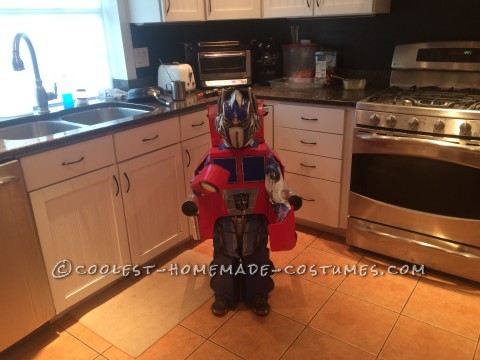