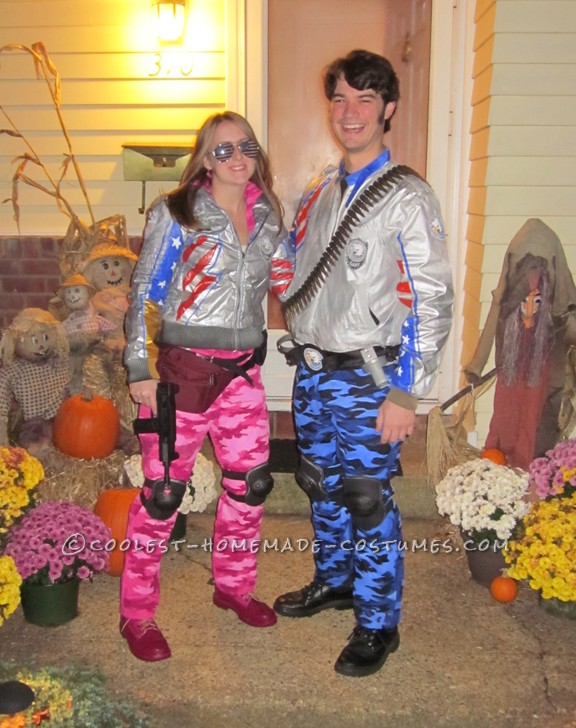 This awesome Team America couple costume is definitely the most intense homemade costume I’ve ever attempted! We love Halloween and we want our costumes to be unique and therefor make them ourselves. I wanted our costumes as true to the characters as possible. It’s hard sometimes because I don’t know how to sew so I end up making stuff any way I can manage. It turned out to be totally worth it! People looked at us silently for a second, then they really took in all the details and our badges and realized who we were and they immediately started quoting the movie. It was a ton of fun and always nice to have a costume that makes everyone go OMG THAT’S SO AWESOME.

SO, here is the long list of stuff we had to make to put these together:

Jackets, which we found at either a thrift store or online for cheap and spray painted/printed silver, then we painted on the flag color details. I made the badges and name labels in Photoshop and printed them on iron-on paper, transferred them to some scrap fabric and then glued them onto the jackets in the specified places.

Pants: We had trouble finding camo pants in these bright colors, so we bought nurse’s scrubs and painted the camo pattern on them. IT TOOK FOREVER. For our shirt collars that come out of the jackets, I cut up little triangles out of the scrubs shirt, painted camo on it and glued it to the inside of the jacket collar.

Accessories: The knee pads, red fanny pack, and the boots were bought at a thrift store. I had to paint the boots pink from their normal yellowish color. The toy gun was bought online. The bullets were bought at a party store, as was the belt, which was originally a beer holder belt (which I put another iron-on decal on).

I also made Lisa’s business card from the movie, Photoshopped my face on it and printed out a few to give to friends.

IT WAS SO MUCH WORK. 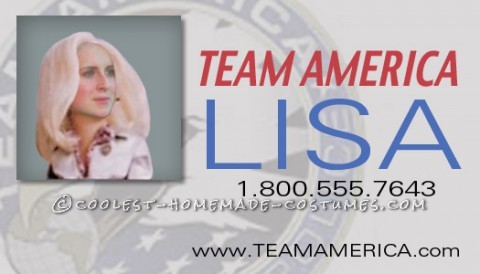 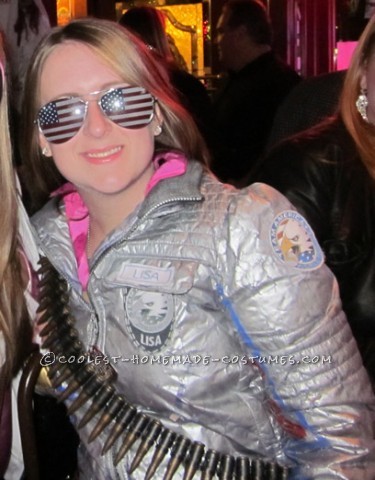