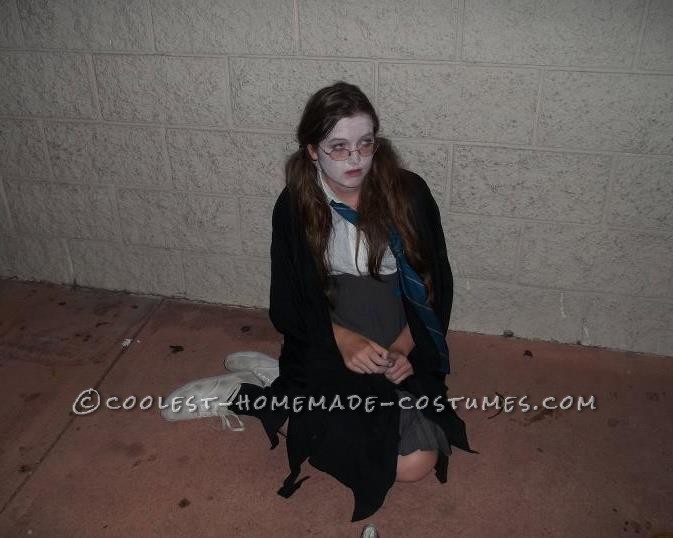 Every time I am in need of a costume, I try my best to pick something out of the norm, something that makes people say, “Wow! What a great idea!” When I decided to go to the final Harry Potter Premiere, I figured that the majority of the people dressing up would most likely be the main trio, or one of the other popular characters, such as Dobby or Dumbledore. I wanted to be a character that wouldn’t be in the movie; that way it would be as if the character was attending as an audience member. To me, the answer was clear: Moaning Myrtle would be PERFECT! I made the most awesome Moaning Myrtle costume ever.

When beginning any great costume, I begin with a trip to a second-hand store. There, I found a gray, pleated skirt, which fell just below the knee, along with a pair of ultra cheap glasses and a blue and yellow striped tie (the colors of Ravenclaw).  The rest of the items that I needed I already had! I wore a white, button-up blouse, and my grandmother’s “bat cape” (it’s supposed to be for a bat costume, but it seemed fit enough to be Myrtle’s cloak). I borrowed a pair of my Dad’s long, black socks and wore a pair of sneakers (my knock-off Keds from Payless). I tied my hair into two low pony tails and used white face makeup to give my face a ghostly appearance. And behold! My masterpiece was finished!

Do you want to know a secret? The key to any great costume is to play the part! It makes everything so much more fun! As I sat and waited in line for hours upon hours, there were many people who got a good look at my costume. Instead of just saying, “Thanks, I made it myself,” I responded in Myrtles high-pitched nasally voice: “What are you looking at? Everybody likes to make fun of me. Just go away!” I even quoted some of Myrtle’s lines from the other movies!

Let me tell ‘ya, I got LOTS of looks. People who were from the back of the line would walk all the way up to see “Moaning Myrtle.” Once in the theater, a guy even came up and asked to take my picture! It was quite the experience and I had loads of fun. Of course, by the end of the night I was completely exhausted, but it was totally worth it. I’d like to conclude in the words of Moaning Myrtle: “Harry, if you die down there, you’re welcome to share my toilet.”

(The picture you see here was one my friend snapped of me when I wasn’t paying attention.)

Cool Harry the Hunter and Voodoo Shaman Costumes from Beetlejuice

2 thoughts on “Most Awesome Moaning Myrtle Costume Ever”