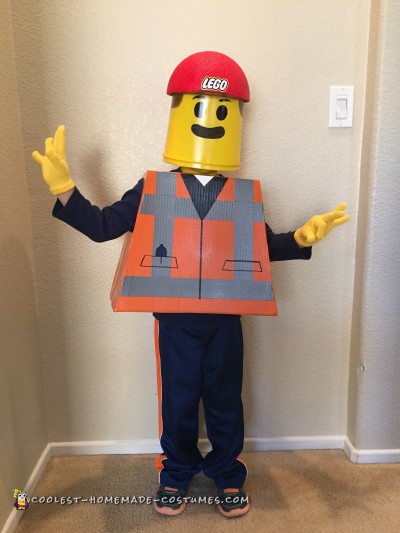 My 5 year old son, Riley, LOVES Legos and especially The Lego Movie. One night we were discussing what he wanted to be for Halloween and I decided that I would attempt to make him his favorite character from the movie, Emmet.

How I made the Lego Movie costume:

I began making the costume after I found the plastic container (I purchased it at a 99 cent store) that would eventually be the Lego head. I drew the spot where my son’s eyes were on the container and from there created the mouth with a black sharpie. After I was satisfied with the mouth I began cutting it out (since my son would see out of it). That proved a little difficult; I ruined one plastic container and had to start over with a spare one I had bought. The plastic easily cracked if not cut just right. After I completed cutting out the mouth, I sanded down the edges with sandpaper and then began spray painting the container yellow. After a couple coats of paint, I drew in the eyes and eyebrows with a sharpie and outlined the mouth as well. I glued the black plastic mesh in the inside so that my son’s eyes would not be as visible.

I wasn’t quite sure how I was going to make the hair. After a trip to Michael’s I found the hollow half Styrofoam sphere and figured I could make the hair out of that. Well, after a little more brainstorming I decided that I would make it into a hat instead and draw the hair on with a brown permanent marker. To make the hat, I sanded down the inside of the Styrofoam sphere so that it fit better onto the container. Once it was the way I wanted it, I created the bill of the hat out of cardboard and then glued it to the sphere. It was spray painted red and a printed out Lego logo was glued to the front. I attached the hat to the container with glue and then drew in the hair with the brown permanent maker.

To complete the Lego costume, I spray painted everything with a clear gloss to give it that shiny Lego look. We found a solid blue long sleeve shirt and a pair of blue pants with an orange stripe in Riley’s closet. I bought some yellow body paint for his neck and I ordered a pair of yellow gloves off of Amazon.com for his hands.

This was my first time making any of my children a Halloween costume. Once I got past the brainstorming phase, I found it to be a lot of fun. Most of the work took place after the kids were in bed for the night. I’m quite proud of it :) 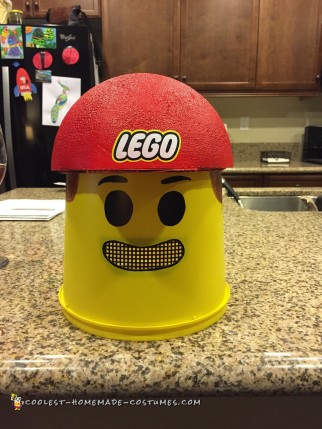 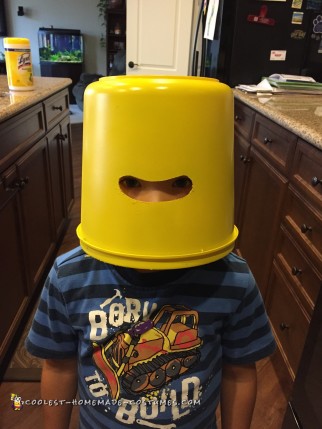 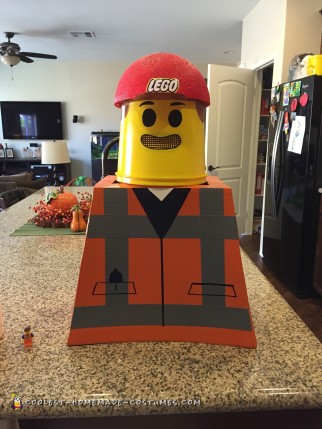 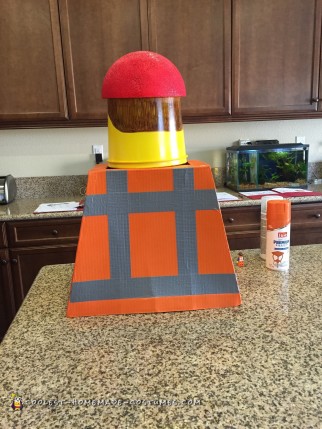