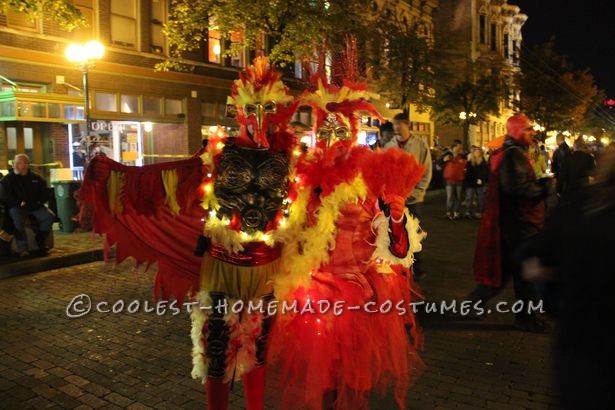 I created Firebirds for Halloween 2013. I got the idea from the movie The Labyrinth. My husband (Tim) is the male bird, and I (Shellaina) am the female bird. I pieced these costumes together myself. I started with red body suits as a base. I then sewed together my red and yellow body suit that went over top of my full body suit. I sewed tulle around an elastic band to cover the bottom of the 2nd body suit. I purchased the beak masks, and added all the feathers and detailing with hot glue (this was time consuming and warranted many burnt fingers)! I added red and yellow boas to the female costume for extra feathers. I added feathers to my wrists with glue. I purchased battery operated Christmas lights with clips and attached them under my tulle. I had wings in the back. I glued tons of feathers together to create wings.

For the male bird I purchased the “body armor” plain, and added more battery operated Christmas lights, as well as the feathers that surrounded it. The lights were hot glued underneath the feathers to hide the wires and the battery boxes were clipped behind my husbands cape that I sewed together as well. The cape was red fabric with tulle added to the edges with red thread. The male bird’s mask was also purchased plain and all the décor was added to it with hot glue as well. The male bird had a lighted Mohawk that I purchased at a novelty shop years ago. He also had homemade wings in back, and the arms feathers were pieced together feather by feather. I hot glued the arm feathers to dowel rods (wooden sticks) and hot glued them in the folds of his cape at the arms. His bottoms were old basketball shorts, and his waist band was an old band outfit piece. I tied the leg guards onto his legs with elastic string; same as the chest piece.

These outfits took me two weeks to make, and they cost approximately $100.00 to make. I am so proud of how well they turned out! We got lots of compliments when we went to a live contest at the Oregon District in Dayton, Ohio. We were stopped by many for photos and compliments. We did not win that contest however; we lost to a couple with minimal clothing. That is what the audience cheered louder for the bare skin which was real disappointment for us! These costumes were frustrating to make piecing them together feather by feather. There were times when I just wanted to give up. They were very difficult to take on and off. The masks were heavy and squeezed our faces. My mask gave me a goose egg on my forehead from the wires and hot glue underneath it. My husband had difficulty maneuvering with his arm feathers because they kept getting in the way.  Despite the difficulty and discomfort I would wear them again because I think they turned out awesome!

I hope you all agree? Thank you for taking the time to read my story and viewing my work.