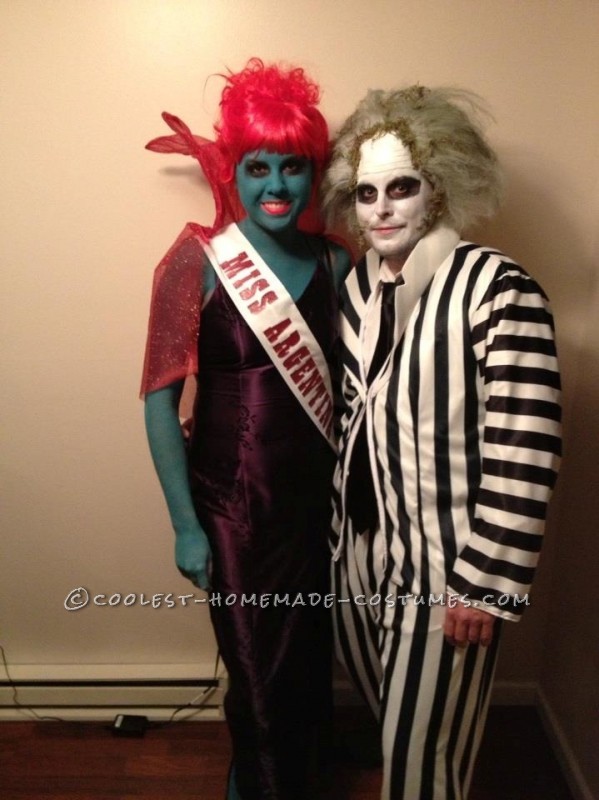 I had so much fun with this Miss Argentina and Beetlejuice costume! I actually pieced it together from random findings. I found the dress on Ebay and had the neckline altered to a V to add sexyness. I went to the craft store for the cape. Using red copper wire and red sheer sparkling fabric I shaped the frame of the cape and then cut out the fabric, double siding it to sew together like a cover.

I made the cape just long enough to my mid-back and ruffled the top. Attaching it was fairly easy, I just safety pinned it to my bra straps through the cape over the wire to secure. It was not easy making the cape. I would have made it a bit smaller because it flopped backwards the whole night, but otherwise I think it turned out great. I bought a curly “doll” wig and pinned it in an updo and trimmed the bangs so I could see, lol. The sash was hand made from simple white fabric. I cut-out red sparkly letters from craft paper and glued them on using fabric glue. Everything stayed put the whole night, worked out well! Except of course for my blue body paint.

Beeltejuice is of course way easier. Guys always have it easier, my boyfriend bought the costume, wig and borrowed a pair of old combat boots. He spray painted the forehead of the wig white to match his makeup and parts of the hair to make it look dirtier. He also bought fake moss and glued pieces to the forehead, in the hair and down the side of his face. Using white clown makeup and black eyeliner he achieved the Beetlejuice look. Everyone loved our costumes so much we actually won best costume!