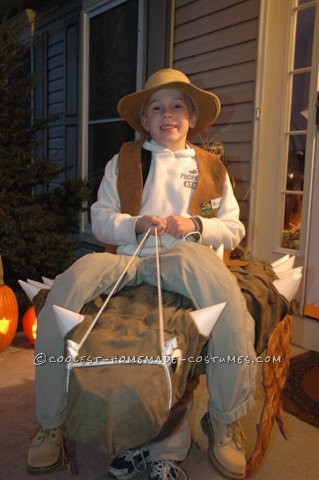 When asking my kids what they wanted to be I should have expected exactly what I got.  It’s not hard coming up for costumes for Ariel and Snow White.  The difficulty comes when your 7 year old self-proclaimed Dinosaur Expert says “I want to be a dinosaur!”  Never ask what kind and how might I come up with that.  Really.  Mom’s of most little girls don’t have any clue what an Ankylosaurus is. Fortunately, I do. Note to self (and any other mom out there)  “I want to be an Ankylosaurus!” should never be followed by “That’s a low walking dinosaur, did you want to have to bend over to make it look right or have it around you?”.  The inevitable answer will be “Ooo!  Like I’m riding on top of it!”

The first step was finding enough cardboard to build this monster.  Fortunate for me, the neighbor just bought a new snow blower and had the box out for recycling.  The sides seemed just about the right size to build the shell.  An oval top and bottom with an oval cut out of the middle for the “Expert” fit through.  It was duct taped together with small strips as the sides.  The head was a box that I cut the end off of and bent to form a sloping face.  The tail was just a piece of cardboard rolled into a tube.  The club tail was just a couple of lunch bags stuffed with other bags and glued on.

My husband had found some bottom of fruit boxes that seemed to have a great shape to glue to the top for armor. The spikes are just cups cut and formed into cones.  The most difficult thing of the entire process was putting in his “hyde”.  It is a suede-like material, was cut around each cone and hot-glued into cracks and crevices to show the detail.

The legs were a bit of a challenge but with a little help from a friend, took those same fruit box bottoms, crushed them, hot glued them on and painted to look like texture.

We took some felt, cut it for a vest.  Computer iron-on patches are great!  A big thank you to James Cameron for the slightly altered logo for the patch on the back of his vest. Take an old pair of pants belted to the rider with shoes attached at the bottom and there you have it!

Besides all of the cheers he got on Halloween, the best part was my little “Dino Expert” was a happy guy  (once we took it off he was even happier- it was heavy!!). 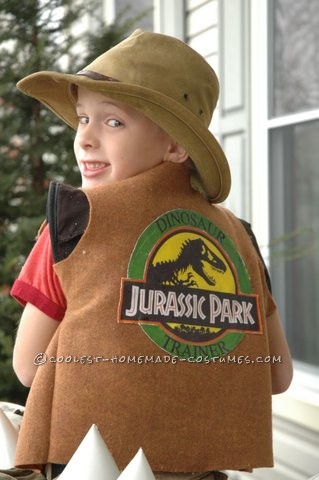 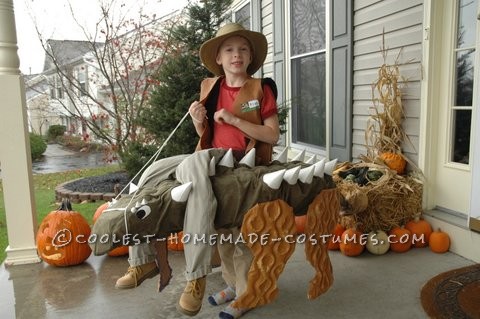