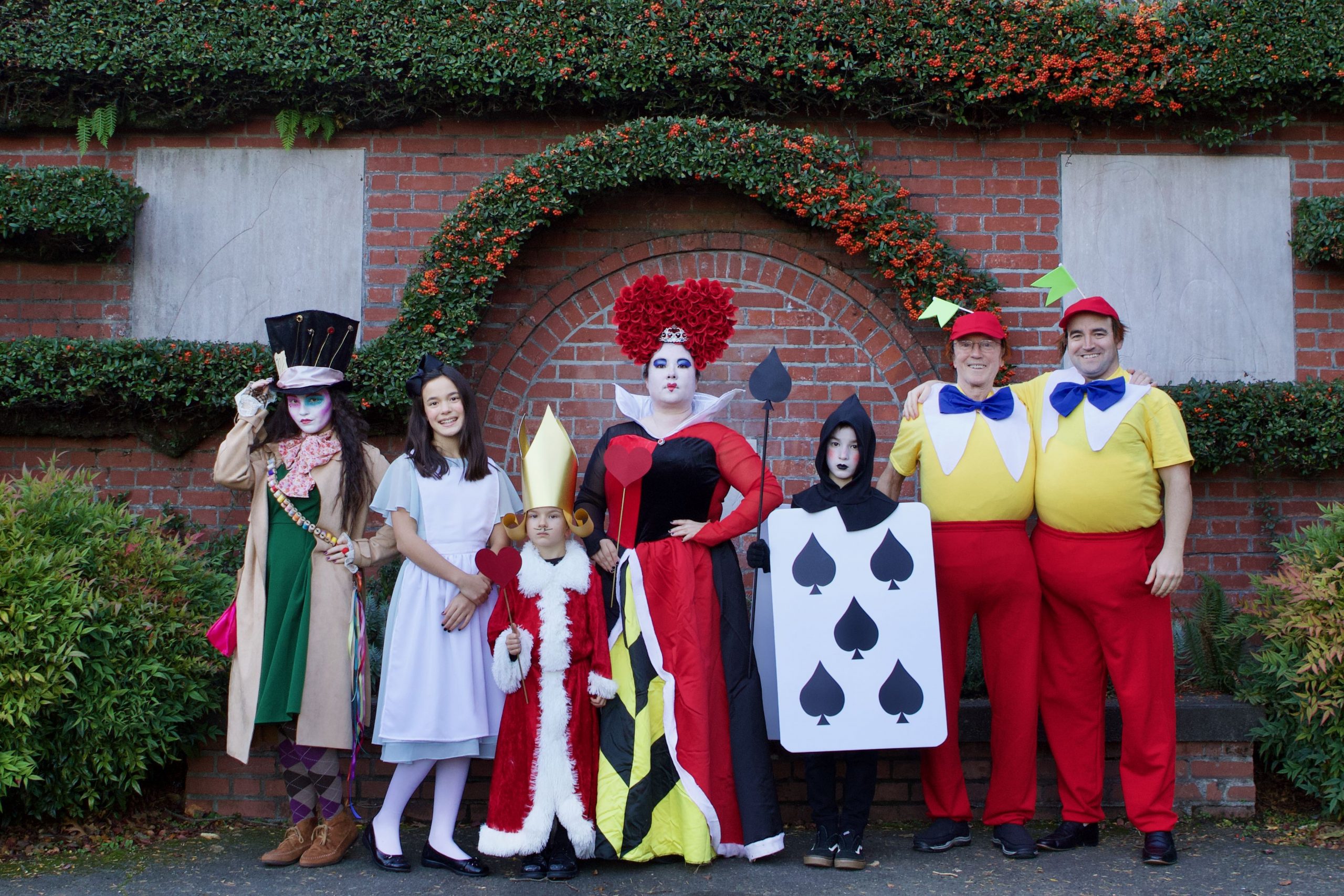 Here’s our Alice in Wonderland family costume. Halloween is a year long event in our household (planning + creating + hunting for good deals). Dressing up together as a family is a tradition that has evolved over the years and we all take it pretty seriously! It is our favorite time of the year.

2021 brought out Alice in Wonderland for our family. From left to right we have The Mad Hatter, Alice, The King + Queen of Hearts, the Five of Spades, and Tweedle Dee + Tweedle Dum.

The first thing we do is brainstorm costume ideas that have enough characters to include the seven of us. Then we cast our parts, figuring out who wants to be who and thinking about how we will make the costume come to life!

The Mad Hatter was my daughter’s #1 choice. She was enthralled by all of the pieces to this character and she wanted to create the costume herself. The only items that I already had on hand were the coat and shoes. I picked up the green dress, tights, and wooden spools (for the bandolier) online.

Other than that I made many trips to craft and fabric stores in search of the perfect material to construct the rest of the costume. She made the hat herself from poster board, wire, fabric, and hot glue. She added old buttons, a peacock feather, and ribbon to her hat. The bandolier was fun for her to make. She used embroidery floss and wooden spools to create spools of thread, and a chain from the craft store to attach them to her coat. Next, she sewed a bright pink handkerchief to hang from her pocket and clipped colorful ribbon to another pocket. The bow tie is created from a piece of floral fabric.

My daughter hemmed the edges so it wouldn’t fray then pinned it into place to hold its shape. She made a “pin cushion” ring from red felt and attached it to a piece of elastic she had measured to fit her finger. She sewed fingerless gloves out of plaid fabric and attached long lace to her wrists with elastic ponytail holders. I braided her hair into 12 braids the night before and she applied her makeup, day of, using mainly body paint and a few adhesive gemstones under her eyes. Phew!

My other daughter enjoyed the role of Alice. I purchased a simple, elegant dress online in a shade of blue that she liked, as she plans to wear this dress again. The apron is sewn in a soft, silky fabric that fits the look of her dress. I already had the black shoes and white tights. The black bow is from Hobby Lobby for $1. Bam! Alice….so easy.

My little one was the King of Hearts. The red robe sewn at home. I made the crown from gold posterboard found at the dollar store. Then, I double sided it so gold would show on the inside as well. I cut and rolled yellow/mustard scrapbook paper to make his “curls” and attached it with tape. Then, I traced a large cookie cutter heart on red scrapbook paper (cutting four hearts total for the king and queen). I cut a wooden dowel in half and spray painted it gold. I used hot glue to attach the red hearts to the gold dowel.

The Queen’s dress is purchased from Amazon as there was no way it could be sewn at home any cheaper…am I right?! The time consuming (but so so fun!!!) part to this costume was the red rose heart hair headpiece. I used foam board and cut out a heart shape + arch to attach a headband. Next, I painted the foam board red. I used fake red roses (about 50), pulled them off their stems, and hot glued them to the red foam board. I used a large needle and yarn to sew/wrap/attach the red rose part to a headband. The foam board and roses are from the Dollar Store. I found a kids silver plastic tiara for $3 from Walmart and hot glued it on to finish off the headband/hair. All makeup was body paint.

In addition, the Five of Spade’s card foam board was purchased from Hobby Lobby, as I wanted it to be durable. I rounded the corners with an exacto blade. I hand drew the spades and pasted them onto the foam board. Then, I used hot glue to attach the front and back of the card with wide black elastic that ran across my son’s shoulders. A wooden dowel was spray painted black and I glued two spades onto it, made from black cardstock. I freehand painted the back of the card to meet my son’s interests. It is Zelda themed. This has nothing to do with Alice in Wonderland, but it made my son really excited about his costume.

Tweedle Dee + Tweedle Dum were simple to put together. I purchased the red hats and yellow shirts from Hobby Lobby for under $15. My husband drilled a hole into the top of the hats and I hot glued a white cake pop stick into the hole. I made flags out of neon green foam sheets and hot glued them onto the cake pop sticks. I used felt and cut out the white collars. Then, I used blue fabric + interfacing to sew the large blue bows. I used a safety pin to attach the bows to the shirts.

I purchased 2X red sweatpants from Amazon and pillows from home to create the tummies. Next, I used brown fur from the craft store, sprayed it with orange hair spray from Party City, and cut out tufts of hair that I hot glued to the hats. The funniest part was watching the Tweedles waddle around and bop each other on the head, punch each other in the pillowy stomachs, and giving each other a hard time. Such fun characters! Whew!

We walked around trick or treating in downtown Portland with our Alice in Wonderland family costume and were very well received. It was fun to see another child dressed up as Alice and to hear them in wonder exclaim, “is that the Queen of Hearts?!?!” We were thoroughly complimented and photographed on our Alice in Wonderland family costume by many onlookers throughout the night. Multiple people told us that we had the best costume they had seen. It was fun to get so many positive comments and even more fun to all be together as a family. We love Halloween!