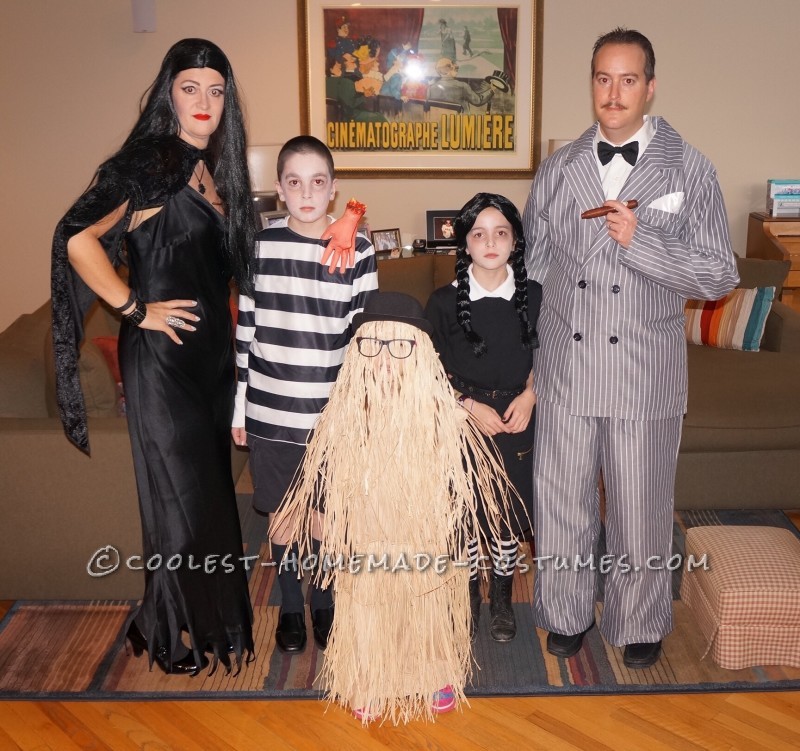 The hardest part of this Addams Family costume was enduring my husband (Gomez) growing a mustache for a month. I was happy on November 1 to say goodbye to that! The rest was pretty simple- his suit was a “fancy gentleman” costume I bought on eBay for under $20.

For Morticia I took a long black dress I already had and cut up the bottom. The make-up was a killer, but there are lots of YouTube videos with directions.

For Wednesday, I bought a cute black dress from the Gap that my daughter can wear for the next couple of years, and layered that over a plain white shirt. She already had about which she wore.

For Pugsley, my son already had black shorts and a striped shirt, he just wore a pair of my husband’s socks to complete it. Both Wednesday and Pugsley wore white cream makeup and a little black under their eyes.

The funniest was our five-year-old daughter as Cousin It. I bought three kids sized hula skirts. I cut a head and arm hole in the king-size pillowcase and pinned two hula skirts to that. The third hula skirt I just tied the waist in a knot and draped it over her head, and covered with the hat.

We had a great time trick or treating. Everyone over the age of 25 or so knew right away who we were.